When the Medical System Fails.

My daughter was perfect when she was born at 40 weeks 3 days. The whole first day of her life was uneventful and sweet. The next day we were about to leave the hospital to head home. All they needed to do was run some routine tests…

An hour later she was transferred to the NICU and pumped full of antibiotics and caffeine before I was even notified. They said the oxygen levels in her blood (oxygen “saturation”) were too low and they didn’t know why. I was clueless back then… but after she was older and I had done more research, I realized they likely gave her the hepatitis B shot against my wishes when they took her back for testing.

The NICU doctors had no clue what was going on with her. All of a sudden her oxygen levels would drop to dangerously low levels and she was turning purple when I would nurse her. Even when she was hooked up to oxygen flowing at 100% she kept desaturating… That monitor… the beeping… Ugh.

They told me I needed to stop nursing her. She had been nursing just fine the day she was born. I pumped for a day but decided to go back to nursing… I wanted to nurse on demand and they wanted me to nurse every three hours. I told them I would nurse her at the very LEAST, every two hours.

I was terrified I was going to lose my baby.

She ended up not having an infection (antibiotics were pointless) and they had no real reason to give her caffeine – it was just because that’s what they typically do with premature infants, for lung development. Except, my daughter was full term and her lungs were fully developed.

The doctor told us we had an immunocompromised child. I remember saying something about a trip to Disneyland we had planned around the time my daughter would be 4 months old. She told me that it would have to be canceled because I wouldn’t be able to take her ANYWHERE.

She told us that our daughter would have to be hooked up to a machine to monitor her breathing, and that she would likely catch every disease she came into contact with and be sick all the time… that she was already sick and that we would need to stay home to avoid any additional potential illness.

While I sat there observing my daughter, who was continually hooked up to oxygen and caffeine, I began to notice that she was doing something with her throat while laying on her back. I told the doctor. She said it was “silent reflux” so they decided to put her on TWO reflux meds at TWICE the appropriate dosage for her weight. (We had no idea… until my husband decided to look into it.)

At that point we had been there for about 10 days. We were trading off sleeping at the hospital in a tiny room the size of a closet, in order for one of us to be there with her at all times.

My daughter was still struggling despite the reflux meds and the caffeine they kept her on. 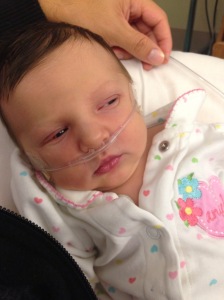 I remember… when the doctor told us we would need to go home with an apnea monitor. She said the monitor would have sensors hooked up to my daughter and it would go off if she stopped breathing. She said it was going to be REALLY loud, because it needs to wake us up.

At the time, my son who was 2, was still sleeping in our bedroom. I said, “Oh no… my son still sleeps in our room.” The doctor LAUGHED and said, “Well he’s not going to be able to anymore!”

(( I’m pretty sure she just didn’t like us and pegged us from the beginning as being *difficult* because we asked questions, had declined the Hep B, and wouldn’t leave my daughter’s side. ))

My daughter slowly stopped turning purple when I would nurse her (though she was still desaturating daily). But now there was a new problem. The doctor told us she wanted to start my daughter on hypertension meds for her high blood pressure. This was news to me. My daughter’s blood pressure was high? When did this happen?

We started doing some research and suspected that the caffeine they were giving her was not only likely causing reflux, but could be the cause of her high blood pressure as well. So I went to the doctor to ask. She said to me, “No, the caffeine is not the cause. I spoke with my colleague who is a specialist and he said that caffeine has never caused high blood pressure in infants.”

It wasn’t high at all. It was perfectly normal.

At that point, almost two weeks into our NICU experience, we told the doctor that we were going to STOP giving her caffeine, and we were NOT going to give her the hypertension meds. She was visibly *pissed* that we put our foot down and told HER what WE were going to do, moving forward. She basically said nothing and walked off.

The nurse stopped the caffeine that morning. By THAT NIGHT, my daughter’s blood pressure began to normalize. Her oxygen desaturations became less frequent and more mild. She was finally stable enough to get ready to go home. The NICU doctor never stopped by to even wish us well or go over anything with us when we were preparing to leave.

They made us go home with her hooked up with all the sensors and cables connecting to the heavy apnea monitor. Thankfully she was only on it for a week, because it only went off twice (on accident, while I was holding her – the sensors had come off of her chest). But the pediatrician I went to wanted me to keep giving her reflux meds.

I then went to speak with a pediatric gastroenterologist – the only medical professional during this whole experience who treated me like an intelligent human being – and he told me that the amount of reflux meds they wanted her on was ridiculous and she didn’t need that much. I also ended up cutting out dairy and other foods in my diet to try to help with the reflux and after two weeks I decided to stop the meds… She seemed to be doing much better.

So, by the time she was 2 months old, she was fine. No reflux meds. No caffeine. No hypertension meds. No sleep apnea machine. Just breastmilk and her family… with her big brother still sleeping in our room and doing just fine.

After she came home, she was the HAPPIEST baby and reached all milestones early. 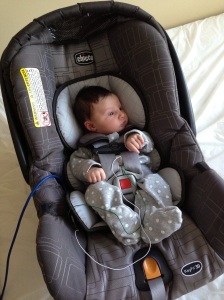 IF WE HAD followed what the DOCTORS wanted us to do, she would have been on caffeine, two reflux meds each at twice the appropriate dosage for her weight, PLUS hypertension meds… for who knows how long! All when her high blood pressure (and reflux!!) was caused by the caffeine – the caffeine which was completely unnecessary to give her in the first place.

And while I cannot prove it, as a mother I am positive it’s because they gave her the Hepatitis B vaccine against my wishes… (How many other parents declined the Hep B in the hospital and they administered it anyway?)

Years later I was speaking with my pediatrician about what happened when my daughter was born, and without skipping a beat he said, “that sounds like a hepatitis B vaccine reaction”.

Lesson learned!! Don’t ever let a doctor tell you what is. Listen, but trust yourself. Trust your instincts, and always do your own research.

“…infants were asymptomatic before immunization but had episodes of apnea, bradycardia, or [oxygen] desaturation after immunization…”

“[Cardiorespiratory event] level is expected to be elevated in the 48 hours following immunization. In a minority of infants immunized, cardiorespiratory events were associated with presumed need for intervention.”
https://www.sciencedirect.com/…/a…/abs/pii/S0022347607001850 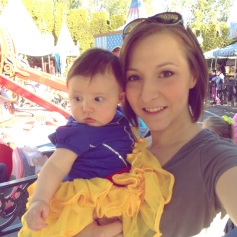 [aw-toh-dahy-dakt] a person who has learned a subject without a teacher or formal education; a self-taught person.